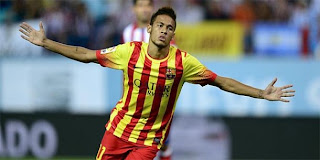 In the first match Supercup Spain, played on Vicente Calderon, there was no winner. Atletico's lead, but Neymar has saved Barcelona defeat

Pedro was first threatened Atletico but Courtois was safe. Shortly thereafter, Atletico took the lead and goal - David Villa! The former Barcelona player scored a beautiful goal for the score 1:0.

Beautiful by Atletico, Arda Turan is centered from the left wing and Villa masterful tore net his former club. By the end of the first part there was no change.


Atletico played the maximum organized and did not allow any kind of blunder that Catalans use. Barcelona failed in the first 45 minutes of any serious threat.

Below, at the outset, the injured Messi replaced Fabregas, Barcelona has started an aggressive to score, Atletico continued to defend well. Home team, moreover, had several dangerous attacks, but there was no specific threat by Valdes.


Many tensions and yellow cards, but missed a beautiful action, which certainly expect when play Barcelona. He managed, however, reserve Neymar score in the 67 th minute. Centered Dani Alves on the right side, Neymar on the other tripods his head placed the ball in the net domestic, which was his first official goal in the uniform of the new club.

Besides, he became only the fourth Brazilian footballer who signed the goalscorers for Barcelona in Supercup Spain.


Shortly after Neymar goal, a good attack Atletico but this time shot Villa defends Valdes. All in all, maybe the most realistic outcome. Barcelona has a solid performance before a rematch at the Nou Camp. We add that tonight's duel Barcelona played in yellow shirts and red stripes or colors of Catalonia.

at 12:03 AM
Email ThisBlogThis!Share to TwitterShare to FacebookShare to Pinterest
Labels: Premiere