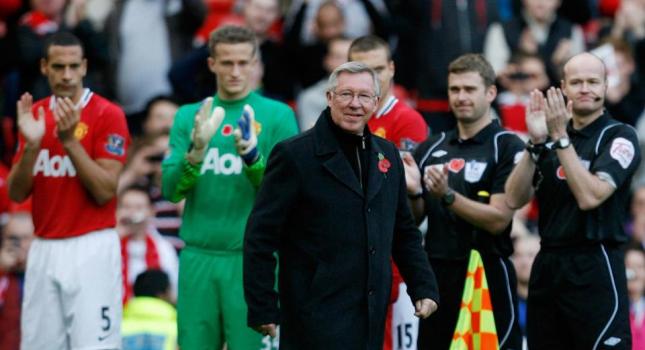 The image that is now able to be seen before the start of the match between Manchester United and Swonsea, will remain certainly until the end of life in memory of Aleks Ferguson and all who attended this unusual event Manchester United legend Sir Alex Ferguson, today are fans, "Red Devil" the , making a spectacular setting on the "Old Traford" effort to be the best way to repay Scotsman for everything he has done and seen to retire man who has more than 26 years of his life dedicated this club.

Players two teams at today's meeting made ​​the 'honorary passage' for Scottish professionals, and in the stands made ​​a fantastic choreography, dedicated longtime manager "devil."

Alex Ferguson stuck with dignity, keeping his emotions, and before the beginning and now during the match Scot gives autographs to fans from the bench Manchester United , the position in which he spent the previous 26 and a half years.
at 11:17 AM
Email ThisBlogThis!Share to TwitterShare to FacebookShare to Pinterest
Labels: Europe News, Manchester United, News, sir Alex Ferguson