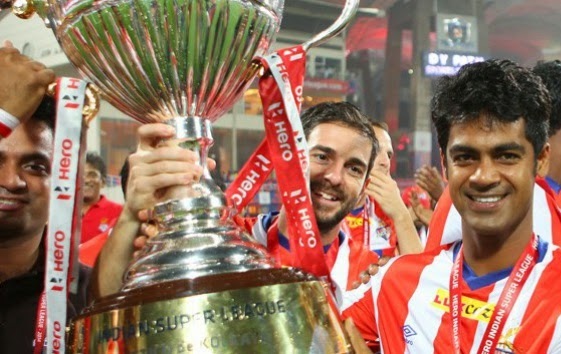 Since that this was first Indian Super League season, Atletico de Kolkata are the first Champions ever


Atletico de Kolkata were crowned the first ever Indian Super League champions as they went on to win the game courtesy of a 90th min goal from substitute Rafique.

With both the sides playing it safe, it was Sachin's Kerala Blasters who created most of the chances in the game. Unlucky to say the least, the Kolkata side had far few compared to the team from south.

Kerala who knocked table toppers Chennaiyin out, looked good on the ball as midfielder Person did all the right things in the middle.

Kolkata on the other side, just couldn't get their team into grove. It looked as if they where too overwhelmed to be a part of the finale. With all the hype of Bollywood surrounding the event.

But it was the corner in the dying minutes which counted the most, as Atletico de Kolkata converted their best opportunity of the game.