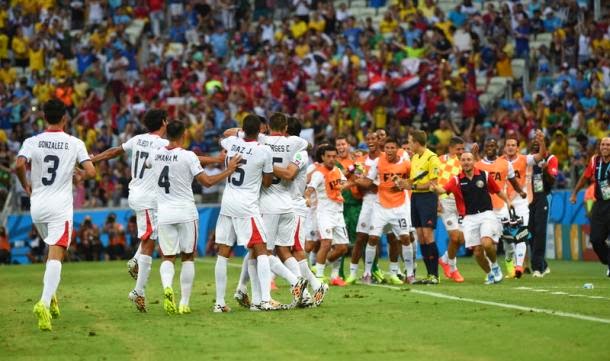 The real sensation staged a team of Costa Rica, which is tonight in the first leg of the first round of Group D World Cup overcame Uruguay with 3:1

Had a Uruguayans ahead of the game a huge role of favorites. On paper they were on the ground are not. A brave team of Costa Rica has managed to make a big turnaround and surprise the whole world, and prepared the first major splash on the 20th Mundial in Brazil.

First in Fortaleza took the lead Uruguayans, who since the beginning of the match were slightly better. After 23 minutes, Uruguay captain Lugano after a cross from one side of Costa Rica fell in the penalty area and the referee pointed to the spot. PSG's forward Edinson Cavani score for 1:0.

Campbell has announced what will await later in the 26th minute, a shot wide from 30 meters Uruguayans. After 30 minutes, Gonzalez shot blocked from five meters and goes to another opportunity Costa Rica. The same player, so Gonzalez, after 42 minutes does not use one more chance.

Campbell has until the end of the first part with his head tried in a difficult position, remained 1-0 for Uruguay. Duarte's three-meter shot in the 51st minute, but Muslera great saves, but remains powerless just a few minutes later.

After 54 minutes, Campbell has with great blow things back to the beginning, and reached his 10th goal in the uniform of Costa Rica. Uruguayans have not even recovered from the shock, and is already Muslera had to once again remove the ball from their own net. In the 57th minute Duarte falling his head hit the net of Uruguay for a big turnaround.

Uruguay is not able to return until the end, and coach Oscar Tabarez did not want the game to introduce sufficiently recovered of Luis Suarez.