Qualifiers Euro 2016: A terminated game between Serbia and Albania

Qualifiers Euro 2016: A terminated game between Serbia and Albania 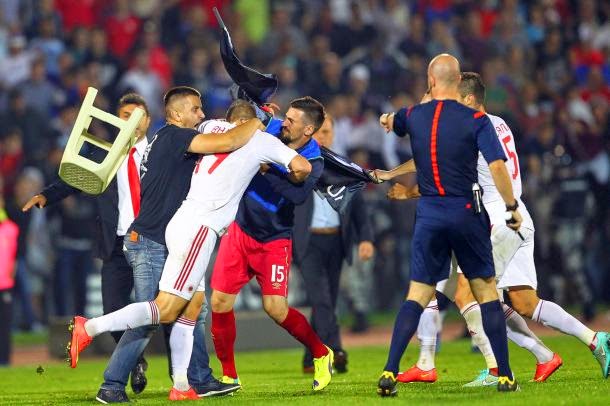 Referee Martin Atkinson decided after 42 minutes to send players to the locker room after the conflict, and the match which provides by more than 4,000 police officers have been terminated.

Previously torches flew to the ground, after which the flag of Albania flattered high over Partizan Stadium in Belgrade.

Namely the Albanian flag was carrying a special high-range aircraft that is operated remotely.

Stopper of Serbia Stefan Mitrovic has managed to catch the flag and drop to the ground, after which there was a conflict of players. To the stadium Partizan entered several fans that created general chaos.

After the meeting, representatives of both association with UEFA delegate and breaks that lasted for an hour, it was decided that the match for safety reasons will not continue.

It is important to note that the fans of Serbia before the match whistled during the national anthem of Albania.
This is not the first incident of fans Serbian national team, recall that similar scenes were seen in 2005 when they played against the national team of Bosnia and Herzegovina, as well as in the last cycle qualification for the World Cup in Brazil when they were in Italy making a disorder.
In the coming days is expected meeting of the Disciplinary Committee of UEFA which will decide on the epilogue of the match.