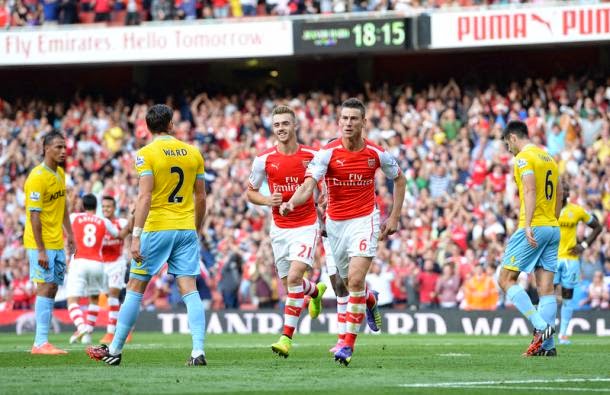 Palace were excellent considering their manager Tony Pulis resigned two days prior to the Premier League season and were minutes away from an impressive point.

Brede Hangeland headed Crystal Palace ahead from a corner, although they couldn’t make it to half-time ahead, as Laurent Koscielny rose to an Alexis Sanchez free-kick.

Keith Millen’s men were defending brilliantly and despite Jason Puncheon’s late red card, looked set to hold on for a point.

However in stoppage time, a corner wasn’t cleared and a Mathieu Debuchy effort was saved by Julian Speroni, only for Ramsey to score from close range.

Sanchez made an Arsenal debut and looked lively, going closest to an early goal, although his chipped effort never troubled Speroni.

After keeping the Gunners at bay, Marouane Chamakh nearly scored from 40 yards after a Wojciech Szczesny error, however the Eagles did open the scoring from the resulting corner.

Hangeland beat Koscielny to the ball and headed home, with no Arsenal player on the far back post.

The roles were reversed on the stroke of half-time, as Hangeland lost Koscielny who equalised from close range, giving Speroni no chance.

Substitute Olivier Giroud claims he should have been awarded a penalty, however the Frenchman’s claims were waved away.

Giroud came the closest to giving Arsenal a lead though, as his angled effort beat Speroni, but also the far post.

Puncheon was shown a second yellow card with two minutes to play and Palace couldn’t hold on.

Giroud’s knockdown was fired goalwards by Debuchy and although Speroni produced a fine reaction stop at point-blank range, Ramsey was alert to smash in the rebound and send the Emirates Stadium faithful into wild celebration.