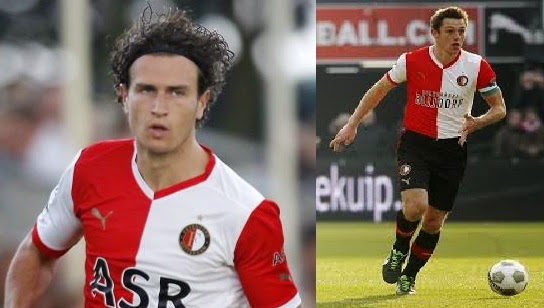 According to reports in the Netherlands, scouts from Arsenal, Liverpool and Everton watched Feyenoord's 2-0 win over PSV Eindhoven on Sunday

According to De Telegraaf, the Premier League trio were at the Philips Stadium to watch Feyenoord right back Daryl Janmaat, and center back Stefan de Vrij, who are both set to leave the Eredivisie club this summer.

Feyenoord announced last week that contract talks with the defenders had been ended, and both decided to weigh up their options after this summers World Cup.

However De Telegraaf believe that all three clubs were not impressed by the game on show, and found the attacking threat shown by PSV, "abominable."

They should however have been impressed by Janmaat's goal which sealed Feyenoord's win, as the right back volleyed into the top corner from 25 yards. It remains to be seen whether any of the Premier League clubs make bids for Janmaat, or De Vrij in the summer, while both should get the chance to impress other clubs at the World Cup in Brazil this summer.

And according to the Italian site "forzaitalianfootball" Inter and Juventus linked with move for Feyenoord star Daryl Janmaat.