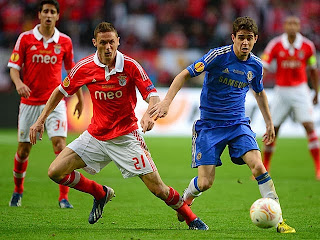 Lisbon Benfica football player and one of the best players at the position last midfielder in today's football, certainly, Nemanja Matic according to the Portuguese, but and English press, he could be back in the ranks of Chelsea, the club he had just arrived in the ranks of the Portuguese giants.

At that time Matic, who was close to London's Blue Team, has served the management team from the Stamford Bridge to compensate for part of the compensation for David Luiz allowing him to Benfica, with of course most part in the money.

However, now that the deal looks done, and when Matic returns to London, Chelsea will now brilliant midfielder who is fully affirmed in Benfica pay 42 million claim by the Portuguese, while according to the island's media that sum almost twice less - 25 million.

Management Arsenal recently sent an official offer to Benfica 30 million euros for the transfer of the Serbian representative, and the Lisbon club leaders are smoothly rejected it. However, yesterday it emerged a real chaos in the world media after Chelsea manager Jose Mourinho started the negotiations and announced the return of this football player at Stamford Bridge within 48 hours.

Worth to point out at the end of is that Benfica last night at the 15th round Football Championship of Portugal 3-0 on their Luz overcame great rivals Porto with 2-0.