The oldest fan in the world celebrated the 100th birthday

The oldest fan in the world celebrated the 100th birthday 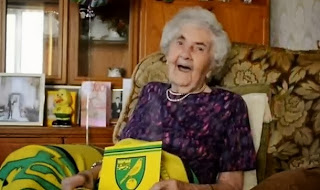 Vera Brighton oldest known fan in the world recently celebrated her 100th birthday. However, for her great life jubilee had no reason for a double celebration because her Norwich defeated by Manchester United

Grandma Vera Norwich follows since the 20-ies of the last century, and on the matches she went to the 1989th when she filled 76 years. Since then all matches follows from her home.

"On my birthday we all gathered and watched the match. Would be nice if we had won, but at least we played well. We deserved at least a point, but the United triumphed. Life goes on," said Vera.


Vera is a "title" officially oldest fan on the planet took in April 2013th after the death of Maria Radaelli, known as Granny Inter. Maria died the day before his 114th birthday.