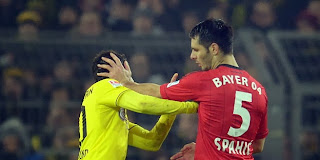 
Defender Bayer was fined by the Disciplinary Committee of the German Football Association with three games not playing because of a red card obtained in a duel with Borussia.

Spahic was first booked for the start over Robert Lewandowski in the 80 minute the aforementioned match, and then got the second yellow card after hitting Henrikh Mkhitaryan.

According to the rules of the DFB, Bayer has the right to appeal within the next 24 hours. Spahic will miss match with Frankfurt, Werder Bremen and Freiburg. He'll be back in early February in the match against Stuttgart.