Giroud: Arsenal does not need a new striker in January

Giroud: Arsenal does not need a new striker in January 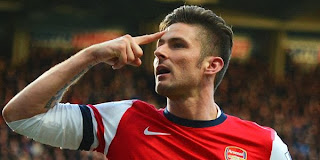 "We have good strikers. Lukas Podolski is back, Walcott can also play as a striker, we have the quality in attack. If coach wants me to rest me, he can do it without buying a new striker. I wish that Arsene does not buy a new striker in January, "said French national team member.

"I am happy that I am not injured and I can play," said Arsenal striker.

"I was lucky to achieve as many goals at the beginning of the season but that luck is currently abandoned me. I know my qualities. As a striker, I'm the first defender of my team. Always a pleasure to steal the ball to the other team. It is modern football, it's all in the pressure, "said Giroud.


Arsenal welcomed the New Year in the first position of the Premier League with 42 points.