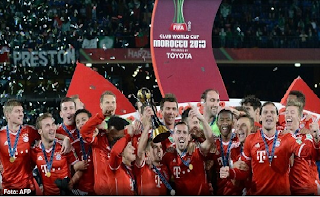 Quite expectedly Bayern players have won the title at the Club World Cup, which was completed this Saturday in Morocco. In the final in Marrakech were defeated Raja Casablanca with 2-0

Bavarians are so brilliant year crowned the fifth trophy (previously won the Champions League, Bundesliga and German Cup and European Super Cup), and them missed out only German Supercup which them "snatched" Borussia Dortmund. For Bayern this is the first title of world club champions, although it should be noted that it has won two titles in the Intercontinental Cupwhich was the forerunner of this competition.


For Pep Guardiola is this, however, coaching third title at the Club World Championship, and won the previous two with Barcelona.

Bayern from the very start of the match against Raja Casablanca authoritatively placed and to the advantage came as early as the seventh minute. Jerome Boateng's header after a corner passed the ball to Dante who beat the offside trap, left alone in front of goal and easily scored.

In the 22nd minute, David Alaba broke through on the left side and sent a ball to Thiago Alcantara who hit from 15 meters.


And below is dominated by Bayern, but they played pretty relaxed, so the advantage is not increased. Moreover, due to the leisurely approach in the final and could receive goal (s), but Manuel Neuer done his job well.
at 12:07 AM
Email ThisBlogThis!Share to TwitterShare to FacebookShare to Pinterest
Labels: Bayern Minchen, Club World Cup, Raja Cassablanca