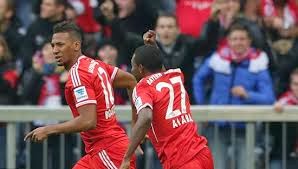 Bayern Munich footballer Jerome Boateng, said that Arsenal is the toughest possible opponent whom Bavarian club could get in the knockout rounds of the Champions League

Boateng for Bayern's official website said that Arsenal completely ready enter into this matches, especially if it is known that last year eliminated exactly by Bayern in the knockout rounds of the elite football competition.

"We got the toughest possible opponents, and it is certain that both games will be quite severe," said Boateng.

A similar opinion and Bayern director Karl-Heinz Rummenigge, who said that he could get and easier opponents.

"We are aware that in the matches with Arsenal need to enter with great respect and that is what we will do," he said, according to British media.


Recall, today was decided by lot that in the knockout rounds of the Champions League, as well as last year, meet Bayern Munich and Arsenal.

at 7:41 AM
Email ThisBlogThis!Share to TwitterShare to FacebookShare to Pinterest
Labels: Arsenal, Bayern Minchen, Champions League