Ajax found a replacement for Eriksen

Ajax found a replacement for Eriksen 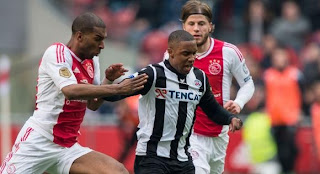 
The 23 year old will now go under a medical examination, before agreeing personal terms with the Amsterdam club, with the deal set to be complete before tomorrow nights deadline.

Ajax are set to pay around € 2.5 million for the attacking midfielder, who Stated after Heracles's 1-0 win over ADO Den Haag yesterday, "I'm happy with it. It is a dream to make the step up to Ajax. "

Heracles director Jan Smit also confirmed the move after the game, "We spent the whole day sitting in meetings and we wanted to postpone the decision until after the game. In a phone call after the final whistle we made the final arrangements. "

Duarte Began his career with Sparta Rotterdam, making 42 league appearances for the club, scoring six goals, before he was snapped up by Heracles in 2011th

In two years at the club Almelo, Duarte has played 76 matches, and scored 12 goals, including two already this season.

Duarte is a speedy player with plenty of skill and ability, capable of playing through the middle, or on the wing, he also offers Frank de Boer options to rotate.

Ajax is a major step up from Heracles, and Duarte will have to handle the pressure of replacing such a fans favorite as Christian Eriksen.

at 1:44 PM
Email ThisBlogThis!Share to TwitterShare to FacebookShare to Pinterest
Labels: Netherland