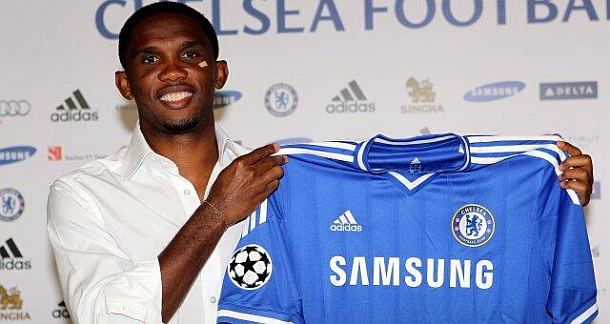 Striker Samuel Eto'o has been confirmed as Chelsea's latest signin


The Cameroonian striker signed a one-year deal with the West London club after spending two-years at Anzhi Makhachkala.

Eto'o, 32, said "I am very happy to be here but also anxious because I want to get playing as soon as possible

Chelsea were in the market for a striker and have recently been thwarted in their pursuit of Manchester United's Wayne Rooney.

Some reports suggested Eto'o would return to Inter Milan where he played under Chelsea boss Mourinho but the Blues have sealed the deal.

Anzhi Makhachkala are clearing high-priced earners off Their books as owner Suleyman Kerimov balances the books.

at 9:32 AM
Email ThisBlogThis!Share to TwitterShare to FacebookShare to Pinterest
Labels: Transfers