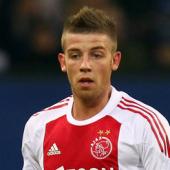 Ajax defender Toby Alderweireld has attracted the attention of Everton


Ajax defender Toby Alderweireld has attracted the attention of Everton, who have tabled Reportedly a bid for him. The player's agent has claimed that his client is now mulling over his options for the summer.

The Belgium international has the versatility of playing at both, center-back and right-back positions, and had been linked with a summer move to Norwich but with that deal falling through, Everton's hopes of landing the player would be high.

The 24-year-old's contract expires next summer and has been linked with moves to Liverpool and Tottenham. Ajax have found his replacement, with the signing of Mike van der Hoorn in July.

His agent Soren Lerby claimed that Everton have now entered the race for his client, who is also being tracked by other clubs.

"It's true that Everton have made ​​an approach for Alderweireld," Soren Lerby told Gazet van Antwerpen.

"But there are other concrete options. Toby will now have to decide which team he sees as the biggest challenge."

at 1:34 AM
Email ThisBlogThis!Share to TwitterShare to FacebookShare to Pinterest
Labels: Europe News