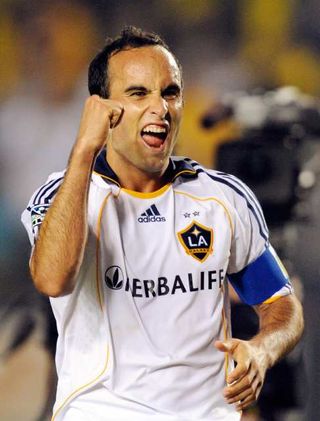 Just a few months after Landon Donovan thought he might be finished as a professional soccer player, he extended his Los Angeles Galaxy contract on Wednesday with his passion rekindled


Donovan agreed to a new multi-year contract that could make him the highest-paid player in America's Major League Soccer (MLS) if he reaches incentives within the deal. His decision to stick with the Galaxy is another turn in an eventful year for the midfielder widely Considered the best player in U.S. history.

'I'm very proud of what I've accomplished, "Donovan said. 'I'm very happy in the present, but I have a lot more to Achieve. This is not a reward for what I've done. This is something I'm going to earn. "

After winning his fifth MLS Cup title last December, the 31-year-old Donovan spent the winter on a sabbatical, battling burnout and exhaustion from 14 years as a December He returned in late March but missed the first month of the MLS season and fell out of favor with the U.S. national team coach Jurgen Klinsmann.

But the top scorer in U.S. team history has been rejuvenated by the Galaxy's unwavering support and his resurgence with the American team. He has embraced the prospect of sea challenges to chase, including a fourth World Cup appearance.

'Was this day ever in doubt? Yeah, for a lot of reasons, "Donovan said. 'I did not know five years ago if I wanted to keep playing much longer. This summer, through a lot of work and through a lot of support from friends, family, the Galaxy, it's now very clear to me that I want to keep playing. I really enjoy this game. I love it. I've found my passion again and I'm excited about it. '

Donovan has been with the Galaxy since 2005th Los Angeles patiently waited for him to return to form while negotiating a long-term deal for his future. Donovan said the deal "was as much about respect and feeling wanted as anything."

Donovan, who previously played with Bayer Leverkusen and Everton, attracted attention from European clubs while his MLS future was uncertain.

at 2:56 PM
Email ThisBlogThis!Share to TwitterShare to FacebookShare to Pinterest
Labels: MLS news