Pep stumbled at the start: Borussia won the Super Cup

Pep stumbled at the start: Borussia won the Super Cup 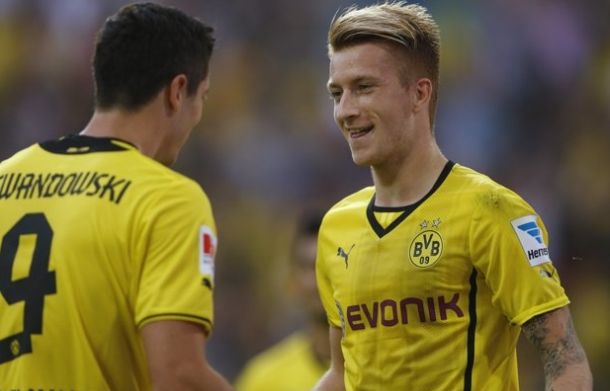 Football players from Borussia Dortmund have mastered the Bayern Munich 4-2 in the German Super Cup match, and are thus welcomed Pepe Guardiola on the bench Bavarians


This fantastic match is better opened team from Dortmund, who after six minutes of the game led by 1:0. Lewandowski is centered, Bender is tried with his head, Starke defending, but in the right place Marco Reus, who is the his head knock the ball into the net for a 1-0 lead.

This result on the scoreboard kept until 54th minute when Bayern reached the equalizer. Robben took advantage of a great throw, and scored for 1-1.

Bavarians joy lasted only two minutes, and then it is in just two minutes Starke twice more pulled out the ball from the net. The first is the 57th minute Van Buyten hit his own net for 2-1, while already in the next attack Gundogan with beautiful goal increased to 3:1.

Robben has succeeded in 64th minutes reduced to 3-2, but the trophy Dortmund confirmed Marco Reus his second goal in the 86th minutes for the final 4-2.
at 12:34 AM
Email ThisBlogThis!Share to TwitterShare to FacebookShare to Pinterest
Labels: Bundesliga