Euro U21: Spain in the finals, Morata continue a series of goals

Spain in the finals, Morata continue a series of goals 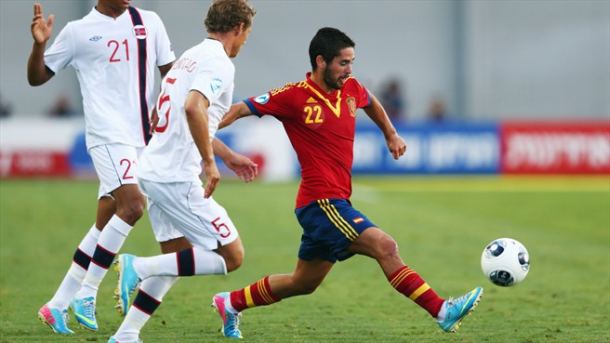 
After the group stage ended with three wins and no goals in their net, in the same rhythm Spaniards continued in the knockout stage of the competition.

In the semifinals are overcome Norwegians with convincing 3-0, and also chosen ones Julen Lopetegui had absolute dominance over the opponent at the stadium in Netanyji.

Young talents of furies to leading goal coming in the final of the first part. Bartra has hired Rodrigo Moreno and Benfica striker scored for 1:0. All doubts about the winners and finalists solved Isco, a talented footballer who plays for Malaga, and well on his way to sign for Manchester City, hit at the 87 minute.
The final result is set by Alvaro Morata in the 90th minute. Real Madrid footballer score in the fourth match in a row at the tournament!

In the second final of Euro U21 will meet Italy and the Netherlands, and the finale is scheduled for three days, or on Tuesday.
at 1:01 PM
Email ThisBlogThis!Share to TwitterShare to FacebookShare to Pinterest
Labels: European Championship U-21