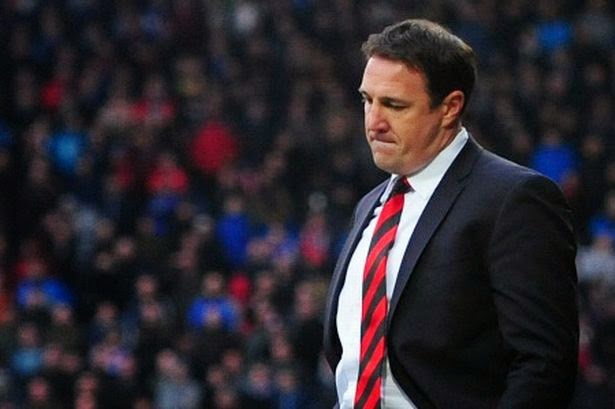 After missing out on the Crystal Palace job because of offensive text messages that were leaked, Mackay’s reputation took a severe hit.

The 42-year-old admitted the texts that were leaked were “disrespectful of other cultures” with sexist, racist and anti-semitic comments among the material to be published.

Mackay left Cardiff City in December 2013, despite guiding the club to the Premier League, after an ongoing row with chairman Vincent Tan.

“I know that this appointment will draw criticism in some quarters but we go into it with our eyes open and we have nothing to hide on this subject,” said Wigan chairman Dave Whelan.

“Malky made a mistake, he knows that, we know that and we have discussed this issue at length face to face.

“He apologised publicly for what happened at the time and has paid for what he did in terms of the bad publicity he has received since and will no doubt continue to suffer in the future.

“But I believe that it is now time to move on. Contrary to the way he has been portrayed in recent months, the Malky Mackay I met this week, and who has been vouched for by the many different people from whom we have sought advice before making this appointment, is an honourable man.

“He is a committed family man with decent values and is a professional who has worked and thrived for over 20 years in the multi-cultural world of modern football. There is nothing more to say about this subject, and as far as I am concerned we draw a line under it from today.”

Whelan confirmed earlier today that Mackay would be given an interview with Wigan and the former Watford manager has been quickly appointed on a rolling contract.

Wigan are struggling in the bottom three of the Championship, which led to the dismissal of the clubs previous manager Uwe Rosler.

Whelan is confident Mackay is the right man to turn their campaign around and guide them back to the Premier League.

“He is the man to lead us back into the Premier League, I am convinced of that having met him and discussed the demands of the job ahead of him,” added Whelan.

“He has led a team out of the Championship before and he knows this league inside out having played and managed in it. His achievements at Cardiff City were magnificent and we need a strong leader who will command the respect of a very experienced and talented dressing room – and he is the man to do it.

Mackay will take charge of Wigan Athletic for the first time on Saturday when the club entertain Middlesbrough at the DW Stadium.