Besiktas will play next two games at the Fatih Terim stadium

Besiktas will play next two games at the Fatih Terim stadium 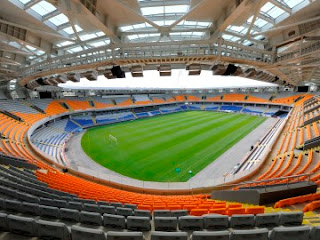 The Black Eagles have been playing their home games at the Ataturk Olimpiyat Stadium for the past year while the Inonu stadium is being redeveloped.

The players, technical staff and fans have all expressed their dissatisfaction at playing at the Olimpiyat Stadium due to the poor playing surface and difficulties traveling to the stadium.

Manager Slaven Bilic was impressed with the atmosphere during Besiktas’s 2-1 victory over Başakşehir and requested to the board that home games be move to the same stadium.


Following discussions with the TFF, Besiktas will play Kasimpasa in the 10th week and Akhisar in the 14th week of the Turkish Super League at the Başakşehir Fatih Terim stadium.