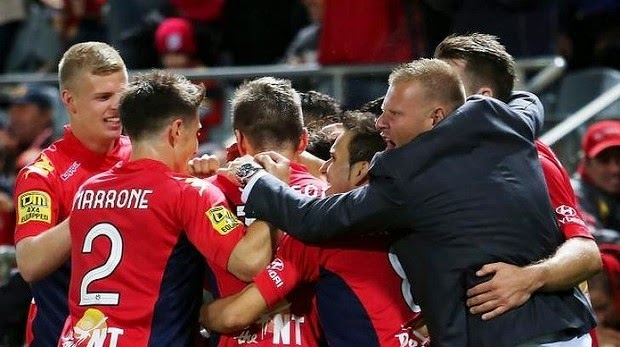 At the opening of the tenth season, the champion was defeated on home ground. David Villa scored the first goal and won a point away

Although Roar last year quite conceivably come to the A-League title, the team Adelaide United has proved to be one of the few teams that can deal with the champion. That happened to in the first match this season.

In front of the home crowd at Suncorp Stadium Classy Reds were surprised not only the players of Roar, but the majority of the 16,000 fans and celebrated 2:1 with goals Djite (33') and Donachie OG (56'). Goal for domestic scored Broich in 20th minute.

Another deserving attention match was played at the Allianz Stadium in front of 25,500 fans. Many of them have come to see the biggest stars of A-League this season (Alessandro Del Piero left Sydney FC), David Villa.

Although the home had lead from 54th minute by goal Gameiro, Villa showed why he had the epithet of "star" and hit in the 63 minutes for 1:1.

Standing after first round you can see here.