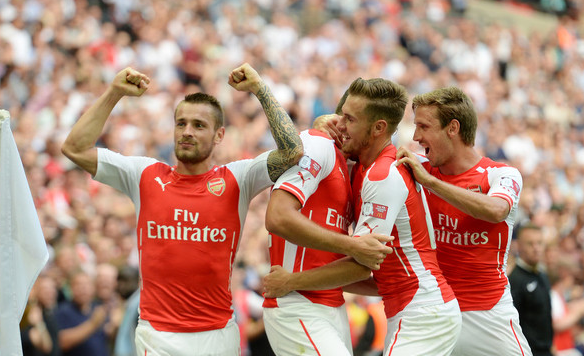 Manchester City fielded a weakened side, with numerous players only just returning for pre-season after a long World Cup campaign, although Arsenal themselves were without their German trio.

Samir Nasri was roundly booed by the Arsenal fans, however he came closest to opening the scoring, with his early shot blocked by Mathieu Debuchy.

Arsenal took the lead minutes later, after the ball broke to Cazorla on the edge of the box, who turned brilliantly before smashing past Willy Caballero.

City struggled to create a clear cut chance in the first half, with Edin Dzeko having a shot inadvertently blocked by team-mate Steven Jovetic.

Arsenal doubled their lead just before the break, as Alexis Sanchez found Yaya Sanogo who held off his marker before finding Ramsey, whose composed finish gave Caballero no chance.

City came close to halving the deficit early in the second period, with Jovetic heading a cross against the post.

On the hour mark Arsenal killed the game off in style, as Giroud held off the attention of Bruno Zuculini, before smashing home from all of 25 yards.