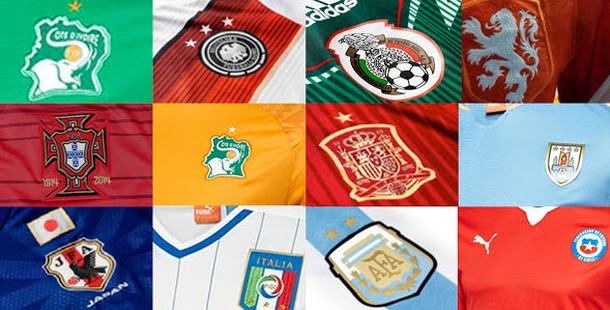 By the start of of World Cup which will be played this summer in Brazil remained a few days. We present you jerseys of all national teams

Thirty-two best national teams will fight for the gold trophy. Each big competition what the Mundial or continental championships, are an opportunity for major sports brands to promote and showcase their latest achievements in the development of sports technology and equipment.

Ever since the World Cup has its own official ball produced by Adidas just as the German company official dresses and faces on the biggest soccer festival. However, this summer the famous sports brand will have to admit defeat, as the main competitor Nike have one selection more at the Mundial in their equipment, rather than the brand with three stripes.

This are kits of national teams that wear Nike equipment:

This are kits of national teams that wear Adidas equipment:
It is because of the fact that Nike has a selection more, should not be surprising that the Adidas at all costs wanted to dress the only debutant in this competition (team of Bosnia and Herzegovina), who will not compete in the "unique" jersey, but in the standard equipment of Adidas series.

Neither Puma, which traditionally wears African selection this time was very much behind the former "big brother" Adidas. Puma will wear at Mundial, Cameroon, Chile, Cote d'Ivoire, Uruguay, Italy, Switzerland, Ghana and Algeria.

The selection of Ecuador will wear Marathon, while the Belgian national team in Brazil to play in equipment the Swiss-Qatari company Burrda Sports.