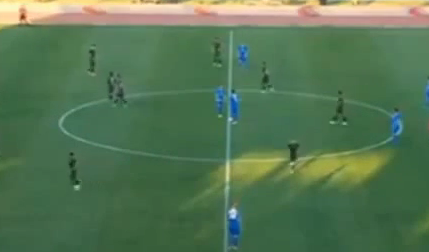 
In a friendly duel in Kosovska Mitrovica, between Kosovo and national team of Turkey was seen seven goals. Turks celebrated a convincing triumph of 6:1, although at half time had only goal advantage. Also, the away team did not play with the best team, mainly on the field were players from the national championship, but it was and it was enough to make a lesson abatement hosts.

The home selection is better to open a duel and took the lead in the second minute by goal Ahmet Ozeki, to Bilal Rain in the 34th increased the advantage of the Turks. The only goal for the Republic of Kosovo is an act of Albert Bunjaku finishing the first part of the game.

Second half time again started by goal Turkey, scorer was Olkaj Sahan, to goals from Mustafa Pektemek, who twice enrolled in shooters and Alper Potuk from white point at the end of the match, Turkey selections cemented the victory at guest ground.

Friendly football match between the representations of Turkey and Kosovo began with a minute of silence for the miners tragic deaths in Turkish mine in Soma for which the Turkey players played in black jerseys. The players were on the field, carrying out a large banner on which was expressed condolences. Kosovars have played in blue jerseys, the color of the flag of Kosovo.

The match was played front of a full stadium, "Adem Jashari" in Mitrovica. At the stadium was around 15,000 spectators. Great atmosphere contribute and sunny warm weather.

In Kosovo, this game assessed as historic, because Turkey is a football superpower, which proved the final result.

National team of Kosovo, this was the second international friendly match, after a decision FIFA in January this year that Kosovo can play international friendlies, but without state characteristics. The first played against Haiti in March, also in Mitrovica and ended with no goals.