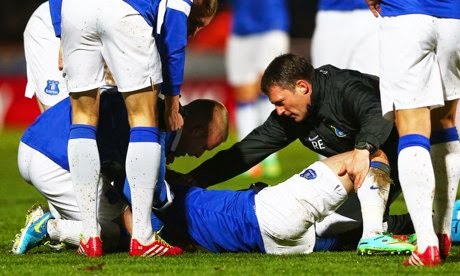 According to Sky Sports, Costa Rica main man Bryan Oviedo will miss the World Cup after failing to recover from his serious broken leg suffered in January

Everton's Oviedo was in fine form when he suffered his double leg break at Stevenage in the FA Cup at the start of the year and showed signs of pain this week in his rehab.

The Central American nation had high hopes for their summer but arguably their best player is now ruled out making a tough looking group even harder.

Uruguay, England and Italy are standing in their way now and Costa Rica team doctor Alejandro Ramirezhas injury has confirmed their tragic news.

"Today he was told to do some physical activity on a hard surface and showed some pains during the activity," said Ramirezhas.

"It means the player will be in no physical nor medical shape to play the World Cup."

Costa Rica coach Jorge Luis Pinto added: "Bryan was an important player, useful in our formation, where he fitted in very well.


"The squad are hurt as Bryan had fitted in very well, I hope his recovery happens in the best possible way for him."