Frank Farina is no longer the coach of Sydney FC

Frank Farina is no longer the coach of Sydney FC 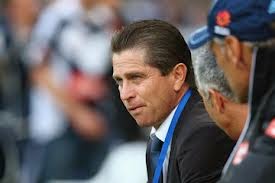 
After the Sydney FC in the regular season won only fifth place and in the the game Final Series defeated by Melbourne Victory 2-1 and failed to provide A-League semi-finals they decided to give fired coach Frank Farina.

The 49-year-old reportedly had a deal to remain in charge next season, despite it having previously been claimed that he needed to secure a spot in the top four to earn an extension.

"Frank joined us as coach in a difficult period last season and has always given his absolute dedication and commitment to the club," said Scott Barlow Chairman of Sydney FC and added: "Frank has shown great integrity and resolve in what has been often challenging circumstances this year.

"I would like to pay tribute to Frank for his professionalism and wish him well for the future,"

Farina took over Sydney FC from Ian Crook in November 2012, but could only take seventh position on the table in 2012-13.