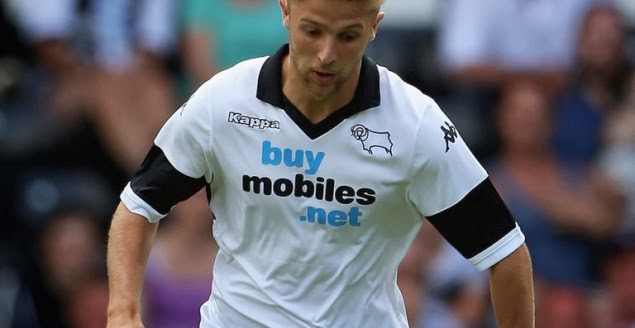 Jacobs, who made 38 Championship appearances for the Rams last season, should be available for promotion-chasing Wanderers' clash with Notts County at the weekend.

Meanwhile, the club have also announced Chris Evans as their new head of football operations.
Boss Steve McClaren had been searching for the ideal candidate to assist with the running of the football club since replacing Nigel Clough at the helm of the Sky Bet Championship club.

Evans, a former professional who appeared for Arsenal, Stoke, York and Darlington during his career, has held numerous roles at Wolves, Sheffield Wednesday and Bolton since his retirement, and was briefly caretaker manager at the Reebok Stadium.

His job will focus on recruitment, management of the scouting system and providing support to McClaren.

"I would like to welcome Chris to Derby County and I'm pleased we have been able to welcome someone of his quality and calibre into our football operations," McClaren told the club's website.

"Chris has a vast amount of experience in a variety of roles during the last 34 years in the game and he will be instrumental in the way the football department operates on a day-to-day and week-to-week basis.

"Chris's arrival is extremely important for the way we want to operate.
"It was imperative that we weren't rushed into an appointment and we firmly believe we have the best man for the job."

"Both myself and the rest of the staff are looking forward to working with him and developing a strong working relationship."

Chief executive Sam Rush added: "I am very much looking forward to working with Chris in this key position at Derby County Football Club.

"He brings a wealth of experience and contacts with him and we believe this appointment significantly strengthens our football operations group."