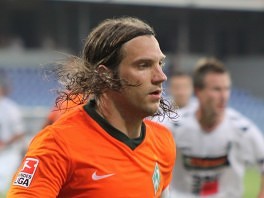 Torsten Frings, 36-year old former national team football player, decided to end his career, and one of the reasons is the current hip injury that he caused problems for a long time.


From 2011. year Frings played for Toronto FC, the club from the MLS league, where he eventually earned the captain bar, while the deepest mark in career left in the Werder Bremen where he played on two occasions, between the 1997th and 2002. and 2005. and 2011. year, and during that time amassed 326 Bundesliga appearances and scored 36 goals.

In the meantime, he's wearing a jerseys two strongest German club Bayern Munich and Borussia Dortmund, and he played 79 games for the German national team, and scored ten points.

The midfielder has announced a return to "his" Werder where has the intention attend and graduate coaching school, and so remain involved in football.
at 9:59 AM
Email ThisBlogThis!Share to TwitterShare to FacebookShare to Pinterest
Labels: MLS news