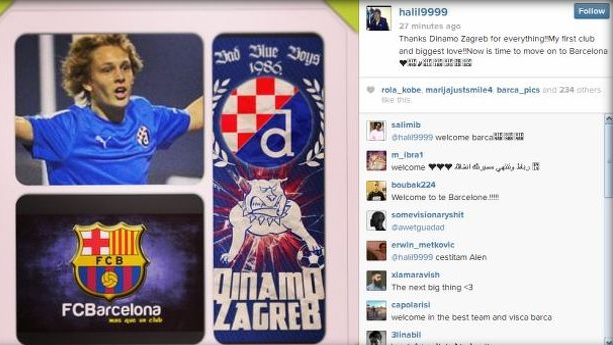 "Thanks Dinamo Zagreb for everything! My first club, and biggest love. Now is time to move on to Barcelona" wrote Halilovic on Instagram.

In this way ended the saga over his departure from Dinamo. Representatives of the Catalan club stayed a few days in the Croatian capital, where the transfer is completed.

Halilovic was immediately found on today's front page of the local sports Sports list with the title "Croatian Messi". The footballer will be a member of second Barca team that competes in the Segunda.

He has the DNA of Barcelona, an excellent overview of the game, a shot from long distance and play one-on-one, "says Sport.

The agreement was reached on the following five seasons, according to a list As, Barcelona to Dinamo will for him pay 10 million euros plus an additional four million depending on his games.