Nothing from Sneijder move to Manchester United

Nothing from Sneijder move to Manchester United 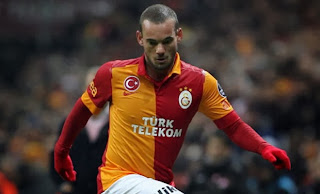 After helping Galatasaray qualify for the knockout round of the Champions League, Wesley Sneijder has responded to rumours of a January move to Manchester United


Sneijder scored the only goal as Galatasaray beat Juventus, and joined group rivals Real Madrid in qualifying for the next round of the Champions League.

On interest from Manchester United, the 29-year-old added, ”I know nothing just as much as you, only messages from the newspapers like a ritual every time the transfer period is coming.”

“Here in Turkey it is sometimes quite annoying. The people are emotional, full of passion.I’m fine here, and enjoying myself. I’m happy here. ”

The Dutch international has found his top form again this season after a difficult spell last year, but after Netherlands coach Louis van Gaal urged him to join Chelsea, Sneijder has been constantly linked with other clubs.