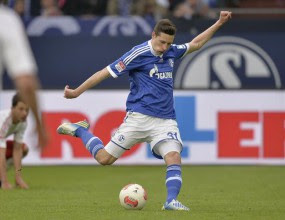 
According to tirage tabloid Bild, he refused offers of Real Madrid and Manchester City valuable 60 million euros! Both clubs have offered a five-year contract Draksler, according to which had an amazing annual income of 12 million euros.

However, he decided to stay in Gelzenkirhenu until June 2018th years, and in that period of time won, the 45.5 million euros.

Julian Draksler will play next season with Shalke in qualifying for the Champions League, and is expected to be part of Team Germany at the World Cup in Brazil.

at 5:40 AM
Email ThisBlogThis!Share to TwitterShare to FacebookShare to Pinterest
Labels: Julian Draxler, Rumors