Bosnia and Herzegovina to step up to the World Cup!

Bosnia and Herzegovina to step up to the World Cup! 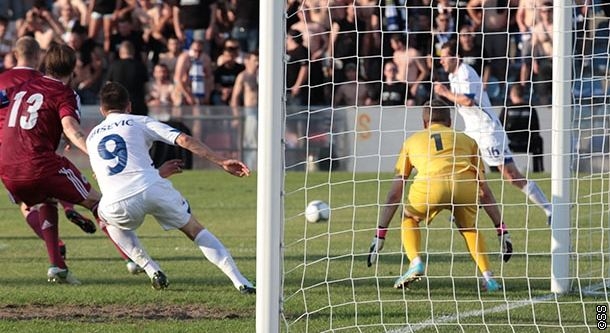 National football team of Bosnia and Herzegovina was smash Latvia in Riga with 0:5 and came close to the historic qualifying for the World Cup


Qualifying for the World Cup in Brazil turned into a real fairytale for hundreds of thousands of Bosnian fans. The team headed by Safet Susic in Riga was demolished hosts with 0:5 and enrolled three new points on its way to Brazil.

Bosnians have never in their history did not tasted the sweetness of playing at the festival of the world's best selection and in these qualifications are found in more than striking distance. Ahead of tonight's meeting, the Dragons held the first place in the group, three points ahead of Greece and victory would come close to winning the first place and an automatic placement in Brazil.

Happiness Safets boys smiled already in 11 minutes when Latvia sent off for serious foul over Rahimic. Although B&H has had several excellent opportunities to end the first part, failed to picking up points. Instead, they all came back in the second half. First, in 48 minute for 0:1 scored Lulic, but five minutes later scored Ibisevic, and Medunjanin in 60th minute scored for 0-3 and solve all dilemmas. Sugar at the end add Pjanic and Dzeko with goals in the 80 and 83 minute.
at 12:47 PM
Email ThisBlogThis!Share to TwitterShare to FacebookShare to Pinterest
Labels: Qualification