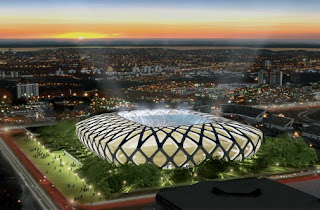 Town Manaus, home of this beautiful Arena, is placed in the center Amazon forest. Organiser of World Championship was consider that at least one stadium must be placed in this area which is present of Brazil.

Beautiful architecture, which remind on Olympic stadium in Peking will have capacity 44 000 places.

During looking for place one of town for Championship there was some critic which say that this area have no football tradition, and this place have honor to be one of host World Championship.

at 7:57 AM
Email ThisBlogThis!Share to TwitterShare to FacebookShare to Pinterest
Labels: Stadiums